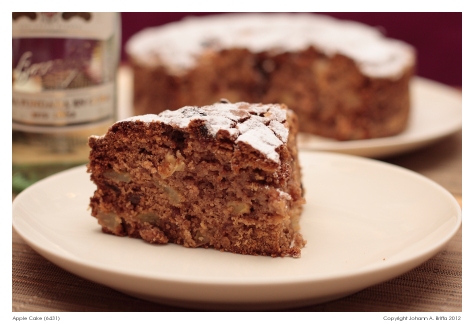 I am not a big fan of apples. I buy sacks of them but it takes an effort to eat them all. The fact that J doesn’t like them much either doesn’t help. However they will always be forever present in this house, just because they are good and healthy. Any extras will undoubtedly end up in pies or cakes.

I am aware that I should make the most of the wonderful juicy apples here. They grow almost everywhere in England. Although all is not as rosy as it seems. A long time ago there were approximately 1,500 varieties of apples in this country. Now there are only around 500, and we are eating a lot less than that. It seems that we are only buying what looks good on supermarket shelves, many of which are imported from other countries. Pity.

There are many recipes out there for apple cake, but I chose to try one from Nigella’s Domestic Goddess book, or a variation of it anyway. (Turns out that Nigella’s recipe is a twist on one by Anna del Conte.) The original recipe calls for walnuts, listed as an optional ingredient. The thing is though, I did have the walnuts, way above the amount stated. I took the package out of my pantry and placed it right in front of me. However, as is typical when in a rush, or when there’s no peace of mind, I totally forgot about them and ended up with a plain apple cake. Typical. It was delicious anyway but I think it did lack something and I missed them. It would have been better to have them in the cake. There’s always a next time though…

I made this apple cake during the Christmas holidays, since I wanted an easy alternative to the traditional fruity one which can be a little bit too much for two people. This one struck the right balance. (Next time I will try to use baking powder instead of the bicarbonate of soda and cream of tartare.) You will need:

Good with a cup of coffee. Enjoy!