So this week I’ve been having a conversation in my head with this year. Yes, this year. It’s going something like this:

Me: Err…I think there’s some kind of mistake.

Me: Yes I think so. My calendar says it’s the end of May.

Me: I think that’s wrong. 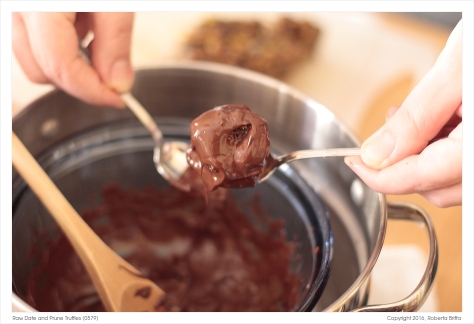 That said, the warm days are seriously kicking in now on this little island and my baking sessions will undeniably lessen in their numbers. And unapologetically so too. The only exceptions will be on those very early mornings when I can open my kitchen balcony door and let the fresh morning air in. Say at 4am. I plan to take plenty of siestas in the afternoons, and due to the frequent upheavals in my sleeping patterns, I’ll take some sleep whenever I can. That said, I won’t need to wake up at silly o’clock to make these and neither will you. 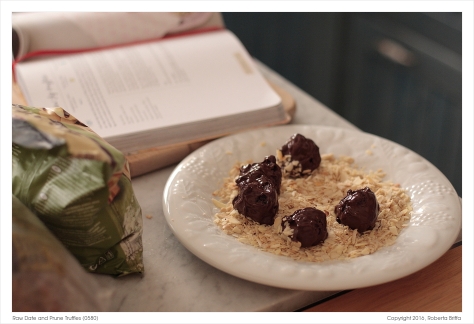 I had my first taste of raw bite-sized truffles when a friend of mine brought some over at our house for after-dinner dessert. They looked good and tasted even better, and I have been hooked ever since. She did give me the recipe, although I haven’t had the time to make them yet, but I’ll keep you posted on those when I do.

In the meantime I want to give you my riff on a recipe I found on Rachel Khoo’s Kitchen Notebook. I must be completely honest with you here. Unlike My Little Paris Kitchen (MLPK), Miss Khoo’s latest book hasn’t really been one of my go-tos. It’s a good book mind you, but my collection is growing so much lately that I just haven’t been able to try most of the recipes there. I am not a fan of the book’s design and layout. I know that it has been modelled on Rachel’s numerous sketchbooks, and even though it is in her style, to me it’s chaotic. I prefer a cleaner layout. MLPK has yet to be surpassed. Having said that, Kitchen Notebook has another truffle recipe I can’t wait to try.

Rachel uses dried figs in hers, but if you can’t find them or you have prunes (or any other dried fruit for that matter) you want to use up, like I did, feel free to try.

Set up your food processor and tip in the prunes, dates, pistachios, butter and salt. Whizz them up until they form a paste.

Tip the paste out of the food processor’s container and roll into 12 small balls (see photos for scale). Place these on a tray lined with parchment or baking paper and set aside. If you live somewhere with a warmer climate I would suggest to put them in the fridge for them to set properly.

Melt the chocolate by placing it in a heatproof bowl over simmering water, making sure that the water should not touch the bottom of the bowl. Distribute the chopped toasted almonds on a shallow dish.

Dip the truffles in the chocolate one by one and coat them completely, using a couple of teaspoons or forks. Then carefully roll them onto the chopped almonds, and place them once more on the lined tray used earlier.

Set the truffle balls in the fridge to set for at least an hour, but preferably overnight.

Tip: You could choose to leave the raw truffles uncoated if you prefer. They will keep in the fridge for about a week but I know they won’t last that long!