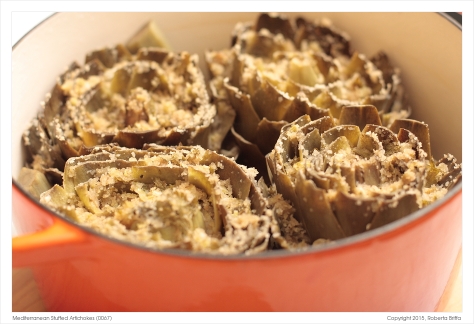 Earlier this week, on one of my regular visits to the greengrocer, I spotted a small amount of artichokes in one of the crates. I remained calm on the outside, but inside I was dancing my happy dance! And they looked too lovely not to buy. Some ladies in the shop gave me so many strange looks, as in are-you-mad-they-are-still-so-expensive kind of looks. What they don’t know is that I missed them so much when we were still living in the UK, where they cost double the price and most certainly they didn’t look as beautiful as the ones we get in Malta. Anyway I certainly don’t regret having them for dinner later that day! I mean, would you?

Since artichokes are seasonal, I stop to think everytime I make the first batch. Mostly because living abroad for such a long time meant that I only baked these beauties around three or four times before. It slowly becomes second nature again, thankfully and now that I posted it on here, it is documented for future reference, not only for you, my lovely readers. This has to be one of my favourites, closely followed by anything chocolate. It’s a delight, to make and eat. Here’s to this year’s artichoke season – one that will last a while.

Wash the artichokes under cold running water thoroughly and cut the stems at the bottom. Don’t throw these away as they will taste great when cooked in the same pan as the artichokes and potatoes.

Trim the tops of each leaf with a pair of scissors, and chop the top, enough to remove the small thorns. This will make stuffing them so much easier. Set them aside.

In a large mixing bowl, combine the breadcrumbs, capers, olives, tuna, anchovies, fresh garlic, pepper and enough olive oil for the ingredients to slightly adhere. Mix all the ingredients together and set aside.

Stuff the artichokes with as much stuffing they can take. There’s no point of trying for less, trust me, and place upright in an ovenproof pan. Insert the potatoes in between the artichokes or wherever you find space and fill the pan half way up with vegetable stock.

Cover and bake in the oven for around 90 minutes, or until the artichokes leaves, potatoes and stems turn soft.

And you have to serve these with crusty bread. Just this once.

One year ago: Guildford – a couple of pics