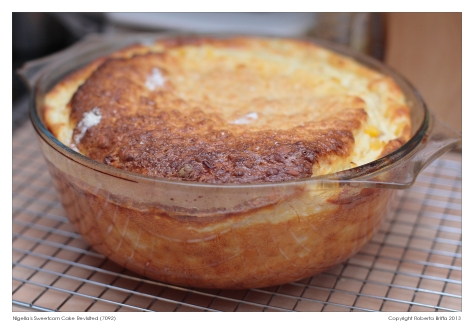 Let’s cut to the chase. Just because I can’t contain my excitement! Today sees the launch of one the most anticipated cookbooks of the year – Simply Nigella. I’m still waiting for my copy so this is not a review, unfortunately (I would have loved to have one right here for you). So until that day comes, in celebration of the book, I am revisiting a recipe which has been an old favourite of mine for ages. It was one of the first things I learnt to make while I was still teaching myself the kitchen basics. I didn’t have any of Nigella’s books at the time, and fifteen years ago the internet was not as it is today. So I watched all her shows on the Food Network. Now there’s YouTube which make things a lot easier!

With paper and pen in hand, I watched intently, and wrote all the ingredients and quantities, inevitably missing a few on the way. Eventually I bought myself a notebook which eventually became a reference book of sorts to me. I still have that notebook, but years have passed and now I have all the books. I don’t want to dispose of my notes though. Most of what I have written on there is almost illegible and it’s far from tidy, but it’s familiar.

So did I say that I can’t contain my excitement? Well, true, but at the minute I also feel somewhat disappointed. I can’t believe Nigella is going over to Guildford for a book signing later this month. Hurrah for that, but I’m not going to be there. That’s one of the cons with the move. You miss things like that and it’s a total bummer. Thank goodness for being able to go when I could. I really would have liked to meet her again though. I would have told her something that made sense then. I felt so dumb when I met her. I can’t remember exactly what I told her but she must have thought I was such an idiot! I’m laughing now, by the way, which is great. Message me if you want to know what happened.

Before I leave you to the recipe, just bear in mind that this is a savoury cake. It should look like a large souffle without all the air. It’s easy so don’t worry about any complicated method. You won’t find anything complicated here. Just make sure not to overmix the batter. You should end up with a light bake. As for the creamed corn, I haven’t yet hunted for it in Malta, but it is definitely possible to make this from scratch. It involves a little more faff but I think it is worth your time.

For an even lighter version, there’s also the option of separating the eggs, and as a last step folding the whisked whites in the yellow cake mixture. This tip is in the book – Nigella’s I mean, not my notebook. That’s where owning a copy comes in handy. If you would rather avoid the salt altogether, add some herbs or spices instead.

Grease an ovenproof dish with a little butter, and preheat the oven to 190°C.

In a large mixing bowl, whisk the eggs, the beat in the rest of the ingredients.

Pour the pudding batter in the greased dish and bake for around an hour. The cake should turn golden and be slightly puffed on top. Insert a knife or skewer to make sure it’s completely cooked through.

Enjoy, and have a browse through this site for more of Nigella’s recipes.

One year ago: Moroccan Inspired Rice