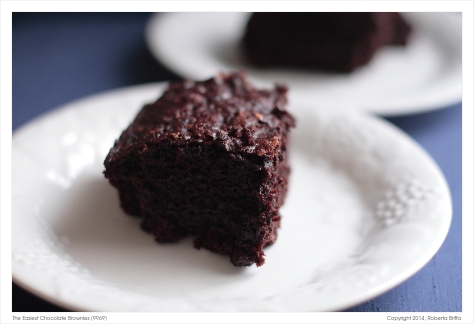 After much deliberation I’ve decided that the last recipe for 2014 will be one of the best I’ve tried this year. When I say the best I mean it in every sense of the word, including the easiest. I make this recipe again and again and it turns out good every time without fail. I also like to make it when I’m in a rush, or before I head off to someone’s house for lunch or dinner. Or when celebrating 4 years of C&T!

Strictly speaking chocolate brownies are not Christmasy, but add a pinch of cinnamon and some icing sugar on the top through a sieve and they turn into something even more special. For me, Christmas is already a hectic time all on its own, so the cooking and baking have to be simple and stress-free. It is a must. So this is one of the recipes I turn to. I kept it for myself for a couple of months (well not really!) but it’s about time I share it with you. It is Christmas after all!

I usually get a yield of around 16 brownies with the following quantities. But that’s because I like to cut them into quite large squares. They are rich but that’s how I like brownies to be. Also, I think that in this case you will fare better using either a wooden spoon or a large hand whisk for this. Don’t bother with an electric mixer; this is so straightforward and takes so little time to prep and mix. Take this from someone who hates the washing up. Good luck and enjoy!

Preheat the oven to 180°C and grease and line a square cake tin with parchment paper, leaving some extra at the sides to make it easier to lift the brownies later.

In a large bowl tip in all the ingredients and mix until everything is well combined.

Spoon the brownie mixture into the prepared cake tin and level it into all the corners and at the top with a spatula.

Bake for around 40 minutes, or until a skewer inserted in the middle comes out clean. (If the top is browning too much for your liking, cover it with some kitchen foil.)

When the brownies are done, remove the cake tin from the oven to a wire rack to cool completely. Cut into squares and you’re done! Perfect for busy parents too.

Before I leave you for now I want to say: happy baking, but more importantly Happy Christmas. May all the joy these holidays bring be always with you. As regards to recipes I will take a couple of weeks off, but I could post some other photos on here if I have other things to share. I will be on Twitter and Facebook though in case of any cooking queries. Take care of yourselves and see you, for sure, in 2015.

5 thoughts on “A Christmas Treat: The Easiest Chocolate Brownies”