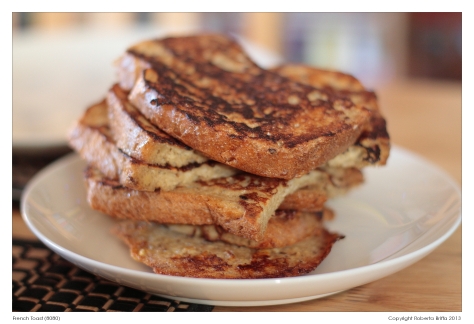 I don’t know about you but I find that weekend mornings are great for a more relaxed breakfast. One of my very favourite breakfast treats is pancakes, absolutely winning hands down. That said, sometimes I dread doing the prep, even though there’s nothing complicated about it. So when I wake up with a pancake crave but don’t want the extra work I make French toast. There’s still some whisking involved but it’s much easier on the nerves I think! Nothing is more peaceful than waking up a little early and pottering around in the kitchen doing minimal work while everyone is still fast asleep.

In general, I don’t do leisurely breakfasts. My mind goes into overdrive in the morning and I don’t have the patience to sit down except for coffee. Having said that, when the opportunity arises for a good meal I take it all in my stride. Even if it means taking some extra time to faff around. When there is actually time to do so, that is! But for me there’s something so attractive and simple about this recipe that makes the easy prep all worth while. And I love the way the sugar caramelizes around the bread and almost makes it crispy. Thinking about it makes me want it now.

I don’t have this every weekend, far from it. So please spare me the usual this-is-not-good-for-you speeches. All the recipes you see here are rarely repeated – it’s not because they’re not good, it’s because food blogging is what I do and it’s almost impossible for me to cook the same things over and over again after I’ve written about them. I would drown in my books if I did so. I do make this over and over again though, not every weekend, but close enough.

The quantities given in this basic recipe are for 2 to 3 people, and you will have no problems in scaling it up. Having said that, I would advise you not to cook this when you have a large group of people coming over. You will be by the stove all morning if you do and instead of enjoying your friends as you should, you will only feel frustrated by the time they leave!

Don’t let this sway you away. A bit of solitary indulgence is good for you once in a while and in my book this also makes a perfect romantic breakfast for two.

Place a flat non-stick griddle or pan on the hob and wait for it to heat up. In the meantime, whisk the cinnamon, sugar, eggs, vanilla extract and milk in a shallow bowl.

Drop the butter in the pan, let it melt and dip the bread into the eggy mixture and coat it on both sides. Leave the bread in the liquid a few moments. Eyeball it depending on the type of bread you’re using.

Place the bread on the griddle and cook until the bread turns a golden brown.

If you start running out of liquid, add some milk to the egg mixture.*
Repeat the process until all the bread is cooked.

I like to eat mine with maple or golden syrup, but you can serve them with honey, fruit and/or yoghurt.**

I only wish to wake up everyday with something like this waiting for me.

One year ago: Blueberry Muffins

Three years ago: Penne with Chorizo

One thought on “Cinnamony French Toast”